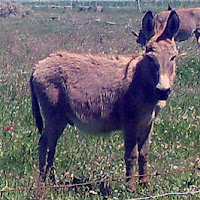 Sardinia, one of the large islands of the Mediterranean is known for its fine sandy beaches, its landscapes dotted with nuraghes and its mountainous interior crossed by many hiking trails.

One of our stays, offers you a trek with Sardinian donkeys. Indeed, there is a donkey breed specific to this island, and we invite you to meet it....

It is therefore an Italian donkey breed (asino sardo), native of Sardinia and locally called molente.

Its origin is confused because according to some authors it appeared on the island in the Neolithic period, while for others it was introduced by the Phoenicians. For centuries, it will be raised locally and will be of great importance in the daily lives of the island's inhabitants. 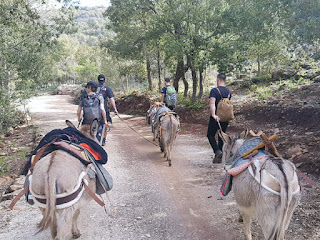 It will be used as a mount, for the transport of firewood, water, milk and more widely for agriculture on the island. It will also be used to turn the millstone, hence its name "Molente".

It will be used for the transport of goods pulling carts, but also during transhumance where it carries the shepherds' belongings.

It is a rustic donkey with a good character. He is calm, balanced, and very brave. He is also quick with a carriage and very enduring.

Its coat is grey with a black cross-shaped band on its back. The edges of the ears are dark and zebra stripes are sometimes visible on the shoulders. Of relatively modest size (between 0.82 m to 1.15 m), its weight remains below 100 kg. His legs are short, strong and stiff. 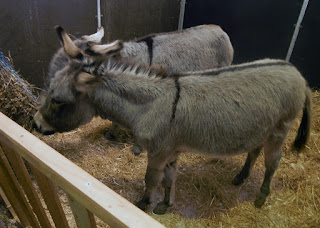 Associazione per la Tutela dell'Asino Sardo, an Italian association for the protection of the Sardinian donkey, was founded in 1991 to promote and protect the species.

Since 1996, during the celebrations of 15 August, a tradition has been established on the island "Palio Régional des Petits Ânes". It is actually a Sardinian donkey race, ridden by children.


Find out about our hike in Sardinia :

Hiking in Sardinia with donkeys